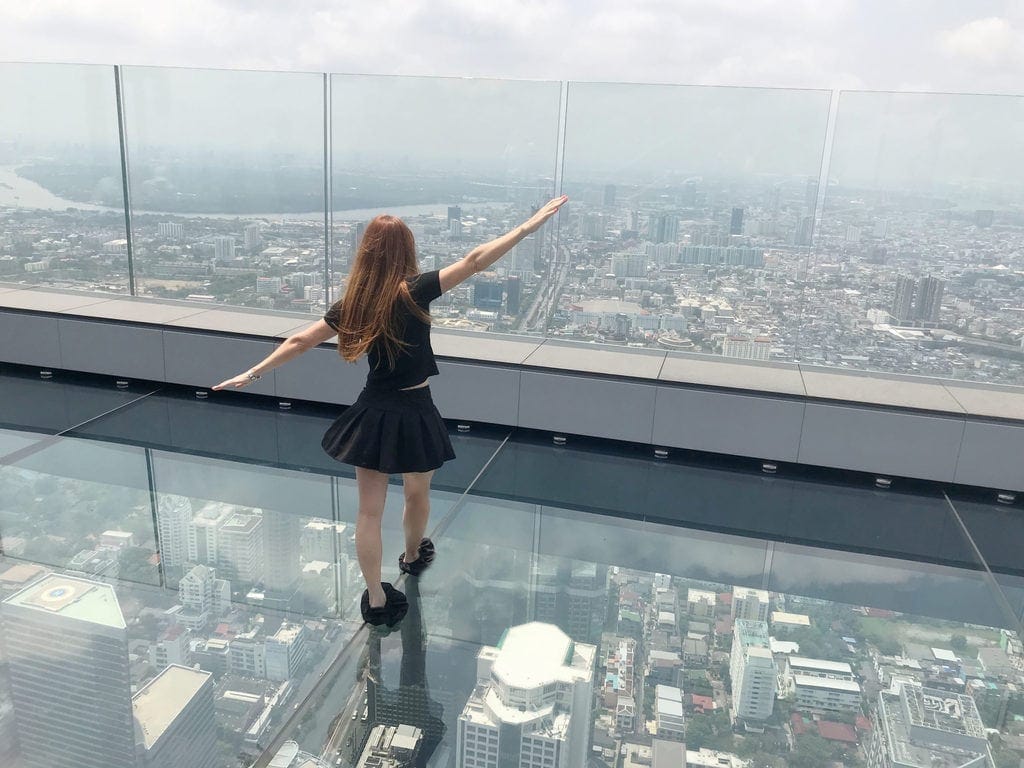 The same goes for travelling. Being adventurous when you are travelling can simply mean actually getting onto a plane and going to a country or even state that you haven’t been to before. Heck, you don’t even have to get on a plane, you could even drive there.

As long as it’s something different and out of the ordinary to what you would usually do, you’re being adventurous. Clark and I are the perfect examples of this.

Being adventurous is different for everyone

My husband and I are VERY different.

The reason I am using us as an example is because we both have adventurous spirits and yet we do it very differently.

I am an adventurous spirited person but it’s more like the adrenalin junkie type of adventurous. I absolutely love facing fears. Both physical and mental fears, and supporting others to do the same.

My idea of adventurous is skydiving in California. Parasailing off a mountain in New Zealand. Walking the glass rooftop floor of the highest building in Bangkok. Riding a navigator in a jet-sprinting race.

My husband, on the other hand, is more of an introvert. His adventurous spirit shows up by the fact that he has chosen to live a life of full-time travel. Completely against the norm, he was brought up in (steady job, get married, buy a house, have kids, work till you retire, then enjoy travelling).

His adventurous spirit sees him going to a bar by himself when he was in Malaysia. Eating street food in Vietnam. Choosing to live in Mexico based on one person’s recommendation. And simply living the lifestyle of a different country every few months like we do.

So, you don’t have to be an adrenaline junkie to be an adventurous person. That’s just someone else’s interpretation. The meaning in the dictionary even says “to try out new methods, ideas or experiences”. It’s all about what being adventurous means to you.

Don’t let it stop you

Over the last few years of travelling full-time, I’ve discovered that a lot of people think that you have to be the adrenalin junkie type of adventurous to do what we do. But, that couldn’t be further from the truth.

The truth is, to get started, all you need is firstly just the will to do it. You just have to have a desire to travel. Even if it’s just a dream at the moment. You have to want to travel. That’s it!

Everything else, like Marie Forleo says in her book, “Everything is figure outable”.

But what if you fly?

There are two great quotes that come to mind when I think of being adventurous. One is by Erin Hanson and it says, “But what if I fall? Oh, but my darling, what if you fly?” and the other is by an unknown author “Oh darling, let’s be adventurers.”

What I take from both of these is, let’s take that risk and give it a go because you just might like it. In fact, like us, it could be the best thing you’ve ever done.

So, I ask of you, if travelling the world is one of your dreams, please don’t assume you have to be like the twenty-somethings you see on Instagram and zip around everywhere exhausting yourself with the adrenalin and tourist things.

You can simply just go live in a different location like we do.

Get your groceries from the local fruit store (which in some countries may just be a bicycle vendor by the side of the road) each day.

Go to a local restaurant and experience something different than you would if you were back at home.

Have lunch at a restaurant on a river in Vietnam where the kitchen comprises of a gas bottle and one frying pan.

What does being adventurous mean to you?

Being adventurous doesn’t have to mean being an adrenaline junkie so please don’t let that assumption stop you from pursuing your travel dreams.

Stepping out of your comfort zone, trying new things, living out of the ordinary. These are all incredibly brave and adventurous things to do!

You don’t have to do anything more than that. You’ve got no-one to prove anything to.

As a Gen-X’er you are at an age where you get to do, exactly what you want to do. And, you are blessed to be at an age that you know what that is.

So, take the step. Be adventurous darling, but do it in your very own way.