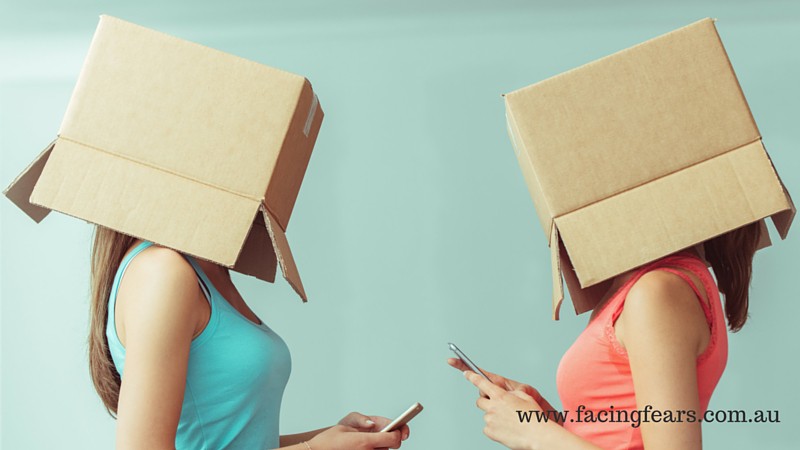 Communication breakdown is rampant and it’s costing us dearly. People aren’t talking to each other. They hide themselves behind their screens, their phones and their busy lives. If you don’t speak up about how you feel when it’s important, you are going to suffer. Guaranteed! In fact, you are probably already suffering because of words not said, opportunities you didn’t say yes to and relationships that went by the wayside rather than have that difficult conversation and tell them how you felt.

This is a rather large claim but I believe the majority of the worlds problems are because of a communication breakdown. I also believe that most divorces, fights, resignations and lost loves are because of this too. So many problems in the world stem from people not having the courage to have what I call, a courageous conversation. Speaking up about how you truly feel, clarifying what you want, or defining your boundaries.

Courageous conversations
I first learnt about having courageous conversations when I completed the Fearless Living Program over ten years ago. The reason so many of us don’t have these conversations (that we convince ourselves we don’t need to have), is because of the fear of the repercussions and the avoidance of what we assume is going to be uncomfortable for us.

This lack of communication often causes confusion for the other person and a sense that there is something not quite right but often they don’t know what it is. This causes a breakdown in connection which then has a ripple effect in the relationship and causes a distance to be created. This gap can sometimes be closed but more often than not it just gets bigger as the awkwardness grows and grows and neither party really understands why. It then becomes easier just to avoid each other instead.

Why do we avoid conversations
So, if the cost is so high then why do we avoid these conversations? Because there is an assumption, created by our fears and based on conditioning, that the conversation is going to be awkward and uncomfortable. Consequently, our fear wants to protect us from feeling that. In our minds we equate that the loss of opportunity or relationship connection is worth it because it’s more important to avoid the uncomfortable feelings.

This conditioning comes from past experiences where we have shared our thoughts, concerns, and feelings and the reaction from the other party has been unfavourable. Maybe the other person got upset, got angry, went quiet or walked away. Maybe you were upset and emotional when you spoke to them too and it caused an argument.

When there is a river of emotions flowing it is difficult to have a real conversation because it usually means you have been triggered, or the other person has, or both. Emotions are usually a result of past experiences and can often be based on fears that aren’t necessarily true. This makes it impossible to have a conversation and ensures that no-one wants to either.

How to have a courageous conversation

There is a way to bridge this communication breakdown. It takes courage and a willingness to become comfortable with the initial uncomfortableness but the rewards are ten fold and make it all worth while. Initially you will have to take my word for it but once you have done this a few times you will see for yourself. Here are the basics of how to have a courageous conversation when someone that matters to you, has said or done something that has upset you.

1. Never have a courageous conversation at the height of the issue when emotions are running high. This is when people are in fight or flight mode and nothing good can come of this. Instead, calm the situation down by stating the obvious “We are both really upset right now, this is obviously important, so let’s come back to this conversation when we aren’t as emotionally charged.” Then set a time to return to the topic. This avoids people saying things that they don’t mean, and that can’t be taken back, in the heat of the moment.
2. Always come back to the conversation at the set time. If either parties need more time, then re-set another meeting time but always make sure you show up at that time because it shows the other person that what you are discussing is important and that they matter.
3. Always start the conversation with how much the other person means to you. Regardless of whether they are your work colleague or your fiancée, share with them how important what they do for you or the company is. Pay them a compliment or give them praise and ensure it is genuine. Share with them how important the friendship or relationship is to you.
4. Next, express how you feel when they say or do what has upset you. For example, “When you talk over me during a conversation, I feel unimportant and disrespected.” By saying how you feel instead of “You make me feel” it takes away the blame off the other person and no one can deny you your feelings. Note: They may get upset because they feel guilty they have effected you that way but they can’t make you feel wrong for how you feel.
5. The next step is to ask for what you want. If you don’t know what you want, then ask for the other person’s support to solve the issue. For example, “In future I would prefer it if you would let me finish what I have to say before you begin to talk” or “I don’t know what the solution is, can you help me to brainstorm some ideas?” By clearly stating what it is you want the other person to do or not do, they then have the choice whether to or not to comply. If you don’t tell them, they have no choice.
6. The second last step is to finish off with again re-instating how much they, or your relationship with them, means to you. This brings you back to the common goal between you which should be to continue the friendship or relationship.
7. The last thing to do is for the other person to honour what has been agreed to be done and for you to not get upset as they work on changing their behaviour. As long as they are making a concerted effort to change then you need to give them a little space to do so.

This process will only work if you both have the common goal of the friendship or relationship continuing. Having said that, by having a courageous conversation you may discover that you aren’t as important to the other party as you thought you were. They may choose not to do what you have asked or even be willing to create a mutually agreeable compromise.

This is when you will know the truth as to how much you or the relationship actually mean to them. This may be disappointing at the time but I believe you are better off knowing the truth than putting energy into a one sided relationship. You can then move on and find a more mutually agreeable partnership.

Helping others to speak up
This process can also work extremely well in reverse. If someone you care about is upset over something you may have done you can guide them through the 7 steps by asking the right questions. Stating firstly how important they are to you and then having the courage to ask “What is it that I have done that has upset you and how did that make you feel?” This is a hugely courageous venture as it means you have to take a hard look at yourself but it opens up the doors to honest communication and with that comes closer connections.

Finish off by asking, “What would you prefer that I do instead?” and then re-iterate how important their relationship is to you. Then the most important step, honour what you have said you would do. This shows the other person that they matter and that your relationship with them matters.

Yes, it may seem easier at the time to ignore situations and hide your true feelings by putting your head in the sand, but silence creates dis-connection, shame, guilt, confusion and separation. It ruins relationships and can diminish opportunities. By having a little bit of courage initially you can open up a whole new level of connection and minimise the costs of communication breakdown.

Initially it may not be easy but in the long run you will come to enjoy the rewards these courageous conversations can bring. In the beginning while you are practicing I usually recommend to clients that they write down what they want to say and then ask the other person, “I have something I want to discuss with you that I feel is important. To ensure I don’t loose myself in emotions and I stay real I have written it down. Do you mind if I read it out to you?” I have never had anyone say no.