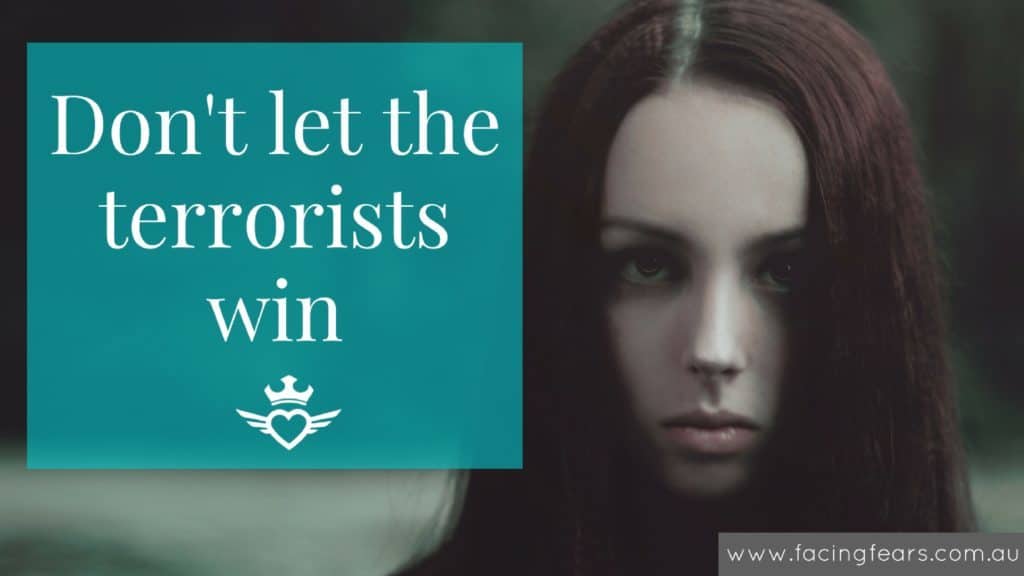 Lately there have been a series of seemingly continual attacks on innocent victims throughout the world with links to terrorist activity. As a person who travels permanently I admit that it caused us some concern. With every flight we took there was a heightened element of fear and we were on edge and acutely aware of those around us as we transitioned through the terminals.

But we didn’t cancel our flights or plans (much to the dismay of some of our friends and family) because otherwise the terrorists would have won. We didn’t buy any newspapers, magazines or go searching online for sensationalised reports in the media because that just feeds into what the terrorists want to achieve – the spread of fear!

We decided that we didn’t want the terrorists to be controlling our lives and our choices so we continued on our journey. To change our plans or not go somewhere because we might be attacked would mean to us, they had taken away our freedom. Don’t get me wrong, we didn’t then purposely plan a trip to a hugely crowded event in a country that had been targeted but we don’t do those sort of things usually anyway. We just went about our lives as we normally would and I encourage you to do the same.

I also began my 365 Acts of Courage and Kindness, not in direct response to the attacks but because I believe the world needs more courage and kindness anyway, and it’s one way that I can make a difference. Maybe in a seemingly small way, but imagine if we all did something towards making a difference. We just might achieve what we all want which is, dare I say in the words of most American beauty queen pageants, “World peace”. There really is no reason why we can’t all live peacefully together!

Just to make myself super clear here, I am not condoning the terrorists behaviour either. I believe, like any criminal who harms another human being, they deserve to be punished according to the laws of the country they commit the offence. I just refuse to let them effect my mind with fear and potentially change my life with their fear tactics.

One of my dear friends chose to express herself on social media recently about the terrible acts these criminals have done. She was saddened by all the innocent people who have died as a result. She was angry towards the perpetrators and felt frustrated by the situation. What she was really expressing though was her fear and it’s ok to feel fear, but don’t let it blind you from the truth.

Remember, this is a very small minority of people who are causing the problem. Most people in the world, including the majority of Muslims, are caring, considerate, human beings who are just trying to get through life successfully and maybe leave a positive legacy for their children and/or their community. Don’t let the minority cloud your vision of the world. Instead, the best way to combat that fear, is to look for the love and multiply it.

Fear can not survive if there is love. I know, this may sound like such a small act and yet it is a powerful one. The reality is, if we all chose not to buy into the fear the terrorists are attempting to create, then they wouldn’t get any satisfaction from what they are doing. If we all chose not to read the stories and to instead complete a random act of kindness, imagine what that could do.

These terrorists are just looking for a reaction because they know they are a minority and they need to use fear as their vehicle because it is so powerful and can spread so quickly. Don’t let the terrorists win. Choose instead to focus on the love and kindness in the world. It’s there, and it is more powerful, if you choose to see it.