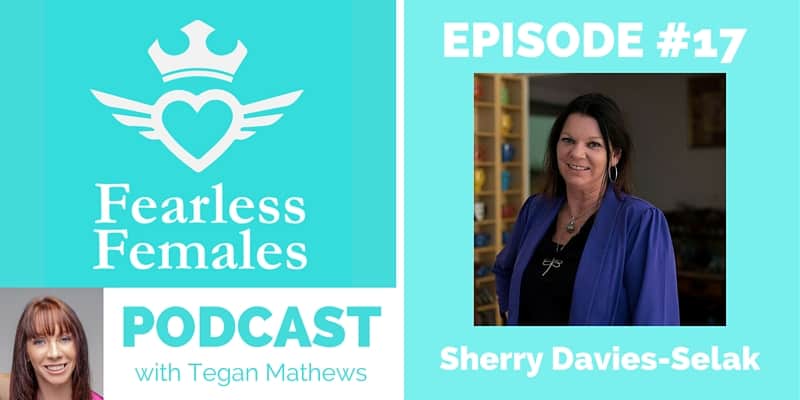 In this episode of The Fearless Females Podcast your host Tegan Mathews interviews Sherry Davies-Selak who shares:

Sherry’s love of coaching and working with individuals started early. Always curious about why people do what they do she has spent her life studying and sharing the things she has learned. Her early career was as a photo journalist and she then moved into real estate and the marketing industries. In addition to her academic and other studies Sherry has owned and operated several businesses including a gourmet deli, a transport company, retail stores and personal development organisation.

Her most recent work in the last 12 years has been motivating, inspiring and educating others about human potential and leadership. She has been a board member for a Women’s Health organisation. She was chapter leader for a coaching organisation and part of the leadership team in WA before moving to Melbourne. She has taught business skills to inmates in a prison and worked for AusAid as a leadership coach with international recipients of the Australia Awards. She shares her wisdom with others through online coaching and in the community through workshops.

In addition to running her business, Sherry continues as a mentor and volunteers for several organisations. She is seen as a ‘go-to industry expert’ for human leadership and development.

Sherry is a passionate and experienced leadership coach gained from a wide range of experience in the personal leadership and human behaviour fields. She has a lifelong commitment to ongoing learning and educating in the areas of personal leadership, training, human behaviour, psychology and consulting. Sherry has coached individuals and groups to be the best leader they can be, sharing that leadership starts with the individual and extends out to their family, team, organisation and the world. Her clients have ranged from mining employees to CEO’s and PhD candidates to inmates in prisons. In addition, she has owned and operated several businesses over the last 20 years.

A Gift for Listeners From Sherry Davies-Selak

By entering your name & email address we agree we won’t share your details with anyone! Sherry Davies-Selak will contact you with the details of your appointment plus you may receive the occasional emails from Sherry Davies-Selak and inner-rhythm. You can unsubscribe at any time.

What’s something you’ve learned Sherry from a facing fears experience?

How did you make it happen?

What are your beliefs Sherry around the ‘souls journey’?

What’s one thing you’ve learnt from all of this Sherry?

What are you passionate about today?

How do you remind people how great they are?

What is something in your future plan that scares you?

Tell us more Sherry about re-languaging?

Where can people reach out to you?

A Gift for Listeners From Sherry Davies-Selak

By entering your name & email address we agree we won’t share your details with anyone! Sherry Davies-Selak will contact you with the details of your appointment plus you may receive the occasional emails from Sherry Davies-Selak and inner-rhythm. You can unsubscribe at any time.