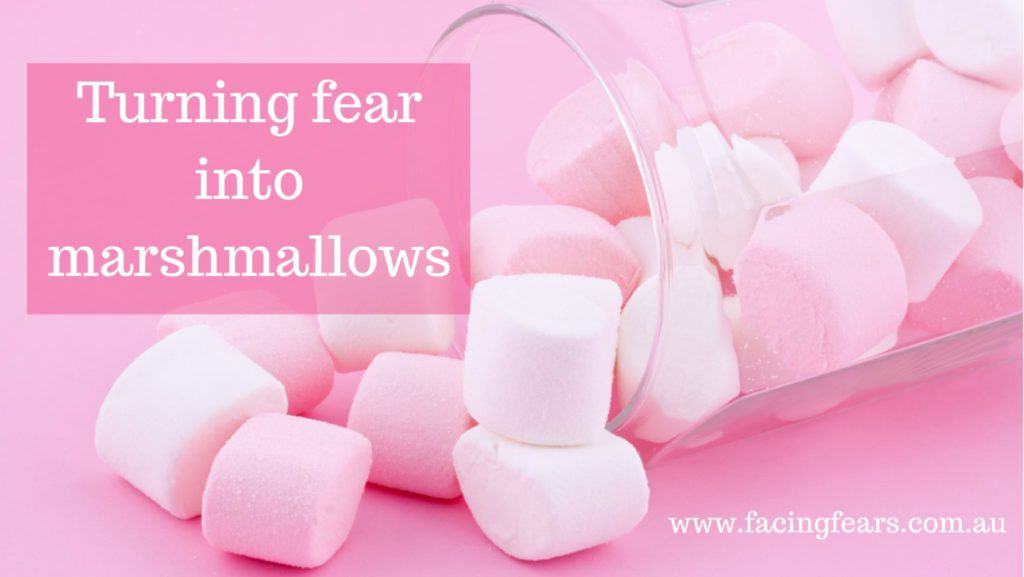 In this post you are going to learn the technique of turning fear into marshmallows and reducing the effect your fear can have on you and your life. One of the techniques fear uses to control you is to make something appear bigger or worse than it usually is. This is a coping mechanism that is a natural part of your human chemistry. It is designed to prepare you for the worst so that you are ready to handle what ‘might’ happen. The problem is that it also has a side-effect of exaggerating what ‘might’ happen and causing unnecessary stress in what is already a stressful world.

You often see this in arguments between two people where someone will say ‘you ALWAYS do …..’ which is just their fear choosing to see an issue as bigger than it really is. In this situation, it usually comes from the necessity of being right which is a fear based response. There is also the saying of ‘seeing the world through rose coloured glasses’’. In the case of fear it is the reverse of this where instead it’s like seeing the world through magnifying glasses where everything appears bigger than it really is.

A valuable tool once you recognize that you are in a fear response is to choose to see it differently. This sounds all very poly-anna-ish but how do you do that when you are in the midst of the grasp of fear? By firstly recognizing it and then making it smaller.

With practice, you can become acutely aware when fear is in control but as a starting point, if you are feeling nervous, insecure, overwhelmed, stressed out or misunderstood then you are well and truly in fear. If you are feeling worthless, inadequate, concerned, insignificant or inferior in any way, then you are in fear.

Once you become aware of these feelings it is important to determine just how big your fear is, or more correctly, how big your mind has made that fear. For example, walking up to someone you don’t know can be a little uncomfortable for most people but some turn it into an absolute die zone. Making it seem like an insurmountable mountain supports their fear to keep them from doing it and consequently keeps them ‘safe’ and of course, stuck in their comfort zone.

Ask yourself this question

A great question to ask yourself at this stage of the process is “is it really that big of a deal?” and your fear will instantly attempt to convince you that it is, but take a moment to think through or perhaps write down the reality of the situation and the likelihood of what you think might happen. Then ask yourself “what else could happen?” By asking this question, your mind has to come up with other alternatives of what might occur and this tends to take away the enormity of the ‘only outcome’ that your mind had previously created.

Another great tool is naming your fears and once you have your fear named e.g. worry, overwhelm, rejection, then visualize it as a shape or a tangible item but make it comical. What I mean is imagine it as a cartoon character, or a piece of food or something ridiculous. For example visualizing my fear as a giant marshmallow works for me as I love marshmallows. Imagining a giant marshmallow standing before me will make me smile (contributing to breaking down the hold fear has on your current state of mind).

Then shrink it down

The next step once you have your fear image in your mind is to shrink it down as small as you can. Just like in the movie “Honey I shrunk the kids”. In the case of the marshmallow, I shrink it down to the size of the mini marshmallows. Then continue the comic thread and eat the marshmallow! As funny as this sounds it actually works. This is a technique used by Tony Robbins who says to say the fear or issue that needs to be dealt with out loud (name it) but to say it in a comic voice like Mickey Mouse (comical). Hearing Tony talk like Mickey Mouse is amusing (both for him, and his audience) and consequently changes his state from fear to empowered and removes the control that the fear had over him.

Try it, you’ll be surprised just how effective this tool is in combating your fear responses and how easy it is turning fear into marshmallows. If you would like to know some other techniques to combat fear, download the 5 Steps to Facing Fears eBook here.